A Pine Valley Productions feature, commissioned by the Irish Youth Wind Ensemble, contributors, including Artistic Director Ronan O’Reilly as well as players, conductors and support staff, talk about the achievements, the satisfaction and the challenges of this ensemble, whose repertoire goes from Bach to Gershwin, Buckley to Fukuda.

One of the enduring legacies of 1985, European Music Year, was the setting up of the Irish Youth Wind Ensemble. Since then, each summer, 60 talented young players come together for a week to rehearse and perform the colourful and challenging repertoire for symphonic wind band. It can include over twenty different wind instruments, from the tiny piccolo to the massive tuba. Despite its name, the ensemble can also have double bass, piano, harp and an extraordinary array of percussion instruments.

This year, to celebrate 35 years of this iconic youth ensemble, the Irish Youth Wind Ensemble, with the Irish Association of Youth Orchestra, have commissioned a commemorative radio documentary that will first feature on RTÉ lyric fm as the Lyric Feature on St Stephen’s Day, Saturday, 26 December at 6pm.

IYWE, supported by the Irish Association of Youth Orchestras, has been a musical training ground for many of today’s music professionals, as well as keen amateur bandplayers. Unfortunately, this year, for the first time, the planned course and concerts were cancelled due to Covid-19 however they are already planning to come together next summer, perhaps as a smaller group, but with the same gusto and enthusiasm!

You can catch the documentary as the Lyric Feature on RTÉ lyric fm on Saturday, 26 December at 6pm and you can listen live online at www.rte.ie/lyricfm/.

The Irish Youth Wind Ensemble is supported by the Irish Association of Youth Orchestras, and funded by The Arts Council.

The Irish Youth Wind Ensemble was formed in 1985 by James Cavanagh and Colonel Fred O’Callaghan. It is one of the lasting legacies of European Music Year, when the Ensemble was one of many artistic initiatives throughout Ireland. That the IYWE has survived and flourished for over three decades is due to the enthusiasm and vision of its founders, the talent and enthusiasm of its members and the efforts and commitment volunteered by numerous supporters.

The group meets once every year for a week-long residential course in addition to other, shorter, gatherings and collaborations. The course commences with sectional rehearsals that are tutored by some of Ireland‘s finest professional wind, brass and percussion players. The Ensemble then move into intensive rehearsals which are followed by a series of concerts in Ireland. The IYWE have also toured abroad on numerous occasions.

The ethos of the IYWE is to offer young wind, brass and percussion players an opportunity to study, perform and experience music specifically composed for the wind ensemble medium and to present music that otherwise would not be heard by Irish audiences. As a result, the Wind Ensemble has had many world and Irish premieres.

IYWE has commissioned works by Philip Martin, John Buckley, Fergus Johnston, Jennifer Walshe and John Kinsella. The group has also recorded a highly praised and well-received CD of Music entitled Where The Wind Blows (after the work by John Buckley for wind ensemble of the same name). A second CD – featuring a recording of their performance at the WASBE conference in 2007 – is also available to buy on Amazon and iTunes.

James Cavanagh and Fred O’ Callaghan shared the podium until 1995. James Cavanagh was appointed Musical Director in 1995 and Ronan O’Reilly took over as Artistic Director in 2008. Guest conductors who have worked with the group include Tim Reynish, John Wallace, John O’Connor, Fergus O’Carroll, William Halpin, Mark Armstrong and Wayne Jeffers.

In the past, the IYWE have had the pleasure of working with Evelynn Glennie, Finghin Collins, Philip Martin and other distinguished soloists from Ireland and abroad. Recent soloists have included Martin Johnson, cello; Gary Curtin, euphonium; James Dunne, percussion; Kenneth Edge, saxophone; Michael Marshall, trombone and Aileen Cahill, piano. 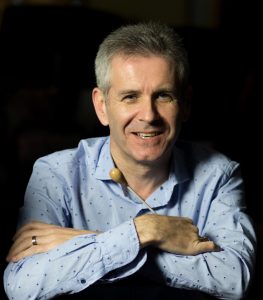 Ronan holds a Masters Degree in Conducting along with an L.T.C.L. diploma for Oboe teaching and an A.L.C.M. for Piano performance. His musical career is now principally that of a conductor but also includes teaching, performing, recording, composing arranging, adjudicating and examining. Conducting engagements have brought him across Europe, the UK and the USA with various orchestras and wind ensembles.

Ronan has been Principal Conductor/Artistic Director of the Irish Youth Wind Ensemble, Ireland’s premiere wind ensemble since 2007. During his tenure as Artistic Director of the ensemble, they have performed nationally and more recently internationally in 2017 as part of the Mid-Europe Festival in Schladming, Austria in 2017. This year Ronan is delighted to share the stage with Guest Conductor Dr Ken Dye, Director of Bands, Professor of Music at the University of Notre Dame.

As an instrumentalist, Ronan has performed in some of the most world-renowned venues such as New York’s Carnegie Hall, Boston Symphony Hall and Chicago Symphony Centre. In his earlier years, he was an oboist and keyboard player with many ensembles including the RTÉ National Symphony Orchestra of Ireland, RTÉ Concert Orchestra, Ulster Orchestra, Lyric Opera and the Irish Chamber Orchestra and he has been a regular performer on National TV shows over the years. He has also given workshops and guest conducted the University of Massachusetts Wind Ensemble and the Shorecrest High School Band, Shoreline WA amongst others during their visits to Ireland.

Ronan is the Director of Music at the Artane School of Music. He is responsible for the day to day running of the Artane School of Music and for the activities within the Artane Band and School programmes. He also co-ordinates, conducts, composes and arranges music for the various ensembles incorporated within the school. The Artane Band itself performs at many corporate engagements as well as performing for thousands at the annual GAA football and hurling championship matches in Croke Park annually. The Artane Band has toured extensively across the USA, Russia and the UK. More recently they have travelled and performed in the Belfast (2016), Glasgow (2017) and Liverpool (2018) Tattoos, also the Nice Carnival Parade in the Cote d’Azur, South of France, as well as performing in the National Concert Hall and O’Mahony Hall in the Helix.

Ronan has also been the brass and percussion tutor to the National Youth Orchestra of Ireland for over a decade, also acting as NYOI rehearsal conductor from time to time.

No stranger to the concert hall platform, he has made a name for himself as a conductor of both orchestras and wind ensembles, his musical experience comfortably strides the worlds of classical, opera, jazz, pop and musical theatre.

We use cookies on this site. We hope that's okay with you. We don't know how to turn them off so if you don't like them, please accept our apologies.I'm okay with that!